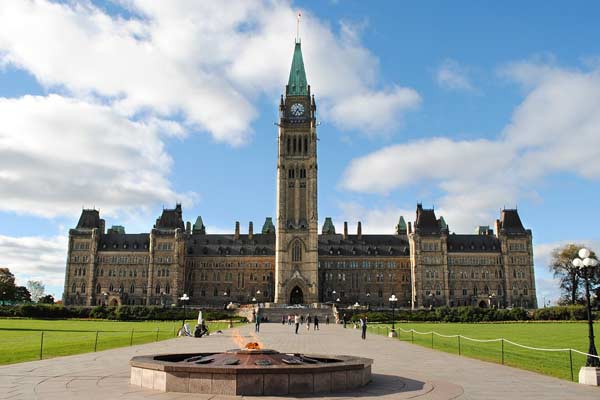 Why Ottawa is the Capital of Canada?

Canada is a country that has been held in high regard across the globe. It is regarded as a culturally rich, tolerant, and beautiful location. However, you’ll be surprised to discover that quite many people are not sure what its capital is.

The most commonly associated cities with the country are Toronto, Vancouver, and occasionally Montreal. Interestingly, none of them is the country’s capital despite their international relevance.

Ottawa was made the capital of Canada due to various economic and geographical factors. Read on to learn more about that.

What is the Capital of Canada?

Ottawa is Canada’s capital, and it’s in Ontario, which is right above the US states of Minnesota, Michigan, Ohio, Wisconsin, and a part of New York. When people think of Canada, they hardly think of Ottawa.

Ottawa is a city located in Ontario province, Canada. It is Ontario’s second-largest town and the sixth-largest in the country. The town has served as Canada’s capital since 1867 to date. Before that, Ottawa was the capital of the province of Canada during the British colonial times.

However, it was not the capital of the province of Canada throughout. The title shifted from Kingston, Ontario, to Montreal, Toronto, and Quebec City between 1841 and 1866.

The capitals of the provinces of Canada would alternate between Toronto and Quebec City. So how exactly did Ottawa become the nation’s capital?

When the Champlain Sea drained about ten thousand years ago, Ottawa became inhabited. It was first inhabited by the Algonquins and utilized as a trading hub before being established by Philemon Wright around 1800.

Ottawa’s history as an agricultural city began then. The town was home to some of the world’s largest sawmills, focusing mainly on timber. Considering that a war with the US was likely after the War of 1812, the British took preventive efforts to reroute trade routes far from the southern border.

On Parliament Hill, barracks were erected, and arrangements were made to ensure that traffic between Kingston and Montreal would be safe. As a result, residents arrived in the area in 1826, forming the Bytown settlement.

The city’s economy grew after the 202-kilometer channel connecting Ottawa and Kingston was completed in 1832. Ottawa was formally named and constituted in 1855. Because of its crucial military position and handy placement between Montreal, Kingston, and Toronto, Queen Victoria designated it the capital city of Canada two years later.

Why is Ottawa the Capital of Canada?

Selecting the capital city of a country is not an easy task. Should the capital be in the heart of the country? Or the most populous city? Who determines the location of a capital? Numerous elements influence it.

Although Canada is a new country, the capital had been determined a long time ago. In 1857, several cities vied for the title of capital, and Queen Victoria decided to select Ottawa. Many people were shocked by her choice of Ottawa, a rather tiny and freshly constituted city, and wondered what her motivation for doing this was.

Numerous tales have since made rounds on how the queen came to her decisions. Some suggest that she pinned her hatpin on a map exactly midway between Montreal and Toronto, and others that she admired the color of Ottawa’s waters.

While this is a humorous depiction of the events, this decision was made based on some political and economic reasons.

Ottawa was a city with great potential. It was experiencing economic expansion and boasted an amazing railway infrastructure. The city also boasted a long trade history thanks to its proximity to multiple rivers.

Furthermore, it is ideally placed between Toronto and Montreal cities and along the Ontario-Quebec border, the center of Canada then. It was also far enough away from the border with America, hence being safer from attacks.

Geographical factors also played a significant role in Ottawa’s appointment as the capital of Canada. Ottawa is in the middle of the country, halfway between Montreal and Toronto, suggesting a relatively central site within the nation. Furthermore, the southern half of the province was home to most of the country’s inhabitants.

Toronto and Montreal respectively represented the English and French regions of Canada. In the mid-nineteenth century, they were the largest in Quebec and Ontario, located in Canada’s heart. The queen chose Ottawa as a reasonable compromise to avoid looking like she favored one of these cities over the other.

The city had access to water transportation, which allowed it to connect with the region. Ottawa was also situated in frontier territory, making it a relatively distant position, far from the border between Canada and the United States.

However, not all concurred with the queen’s choice. Therefore, Toronto was re-elected as the capital for two years, then Quebec City for the next six. Ottawa was not legally proclaimed the capital city until 1866 when Parliament first convened.

When is the Best Time to Visit Ottawa?

Ottawa, much like most of Southeastern Ontario, has four distinct seasons. The summers are warm and humid, often temperatures ranging in the mid-thirties. Winters are cold and unforgiving, with a lot of ice and snow.

Fall and Spring are the best seasons to visit, thanks to mild temperatures favorable for exploration. During the cooler months, though, temperatures are prone to fluctuate dramatically. Plan your trip to Ottawa around the activities you want to do and the festivals you want to attend.

What to do While Visiting Ottawa

Being a political city, visiting the House of Commons should be on your to-do list. The majestic Gothic renaissance Parliament Hill, which overlooks the Ottawa River, is located in the city’s heart. Canada’s Parliament is located in this structure, a popular tourist destination.

You can also visit the Rideau Canal, North America’s oldest continually operating canal, which is primarily utilized for leisure purposes, such as pleasure boating. You can have a picnic in a conservation area or enjoy skating on the canal during winter.